Christmas marks the darkest time of year, but Copenhagen is covered in bright lights and filled with joyful activities, craftsmanship and design, and lots of delicious food and beverages to keep you warm. In other words: plenty of the famous Danish hygge.

Christmas in Copenhagen offers a Nordic mix of Christmas past and present with an eye on the future. The Danish capital keeps the Christmas spirit high, as it conquers the darkness and slowly, but steadily, moves towards lighter times.

So, whether you are looking for outdoor activities for the whole family, great food or want to go shopping for that little, handcrafted present for that special someone, Christmas in Copenhagen comes with a capital C. Or as explained by Kristina Junge Jørgensen, an experienced guide in Copenhagen:

“Christmas in Copenhagen is special because of the lights all over the city, the cold weather, the smell of fir/pine and gløgg, and the sound of Christmas carols.”

Even though Christmas is at the darkest time of year and makes you want to curl up inside with lit candles and home-baked goodies, Copenhagen offers plenty of possibilities of taking the Danish hygge outside. You can visit museums, and other attractions, which offer Christmas-themed events or do something more active to make room for a bit more of the city’s delicious Christmas treats.

The Danish Christmas cuisine is part of a long-standing tradition dating back many centuries and is an important part of the Danish cultural heritage, which reflects a strong agricultural past. For many Danes, the traditional Danish Christmas food plays an immense role during the festive season as the fun and hygge with dear friends at Christmas lunches and parties often revolves around the Christmas food as a start. It is a time to enjoy delightful Christmas dishes that eventually leads to the big Christmas dinner on Christmas Eve.

The traditional Danish Christmas dinner usually consists of different kinds of oven-roasted meats, usually pork, duck, or goose with pickled and fermented vegetables on the side. Red cabbage, pickled cucumbers and caramelised potatoes are must-haves to accompany these. For dessert, most people go for the Ris á la Mande, an updated version of traditional rice porridge.

This is how Bettina Buhl, Food Historian at The Green Museum, describes it:

“Danish Christmas food is very much related to the time when we were mostly farmers. It consists of farm animals and quite everyday ingredients. With the evolution of bigger cities such as Copenhagen, the older food traditions were refined and made more luxurious as living standards improved. But still with the same base of products.”

Even though the dishes on Christmas Eve are rather traditional, some local restaurants are, of course, taking the local Christmas cuisine in new directions. Especially the Christmas lunch, which is closely related to the tradition of smørrebrød, and locally brewed Christmas beer is often and happily reinterpreted.

“In December before Christmas Eve, the Danes are usually more willing to experiment with the food. This is obvious especially in the many restaurants in Copenhagen serving smørrebrød in new and exciting ways” Bettina Buhl adds.

Where to try innovative Christmas food in Copenhagen

In Copenhagen, we care about traditions, but we are also always seeking new ways to refine the old. A couple of places that have been successful in doing just that with the Danish tradition of food and beverages are listed here.

Hotels taking Christmas to the next level

Every year, some of the hotels in town make a grand effort to celebrate the beginning of the festive season, capturing the joy of Christmas with colourful decorations and twinkling lights. Read more about these hotels that will most certainly get you in the Christmas spirit here.

Hotels taking Christmas to the next level

Christmas presents in the Danish capital of design

Danish design with its functionality and simplicity is world-famous, and Copenhagen is the capital of it. The long tradition of design and craftsmanship is evident everywhere you go. In addition, Denmark has a long tradition of Christmas decorations in various materials, for example, the famously weaved Christmas heart created by Danish writer H.C. Andersen in the 1860s.

Whether you are just here to enjoy the architecture sprinkled in thousands of Christmas lights, or you are searching for handcrafted special presents, Copenhagen has plenty of unique shopping possibilities with both stores and designers Christmas markets.

The next generation of both educated and self-taught designers are always looking to refine the Danish design traditions and move them into the future and can be experienced at various places in the city. 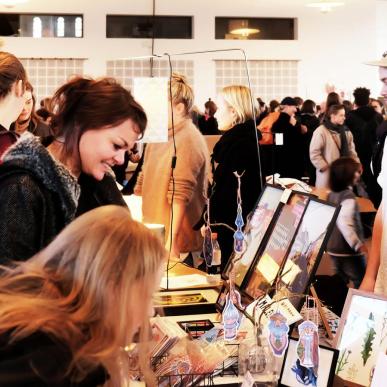 Have an artsy Christmas at The Royal Danish Academy

On 29 November from 10 am- 17 pm at The Royal Danish Academy's annual Christmas market, students and employees sell their own works counting anything from gorgeous ceramics, prints, jewellery, bags, Christmas decorations and much, much more. Address: Philip de Langes Allé 10, 1435 Copenhag... 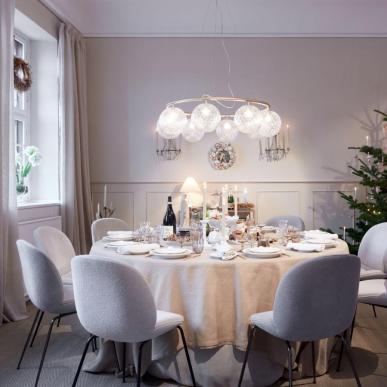 As sure as Christmas comes every year, so does Royal Copenhagen’s annual Christmas exhibition which draws over 200.000 guests to its flagship store on Amagertorv - address: Amagertorv 6, 1160 Copenhagen K.

A designer classic for Christmas at Paustian

The flagship store in the heart of the city displays countless Danish designs from the classics to the newcomers. And if you are looking to buy Christmas decorations from famous Danish designers too, you have come to the right place - address: Niels Hemmingsens Gade 24, 1153 Copenhagen K.

Although it is not a typical Danish tradition, in the past few years Copenhagen has been seeing all kinds of Christmas markets popping up around the city's neighbourhoods in the weeks running up to Christmas Eve. Read more about cool pop-up design markets to the more traditional markets serving gløgg and æbleskiver throughout November and December here.

Christmas in Copenhagen - press photos. The photographers must be credited. 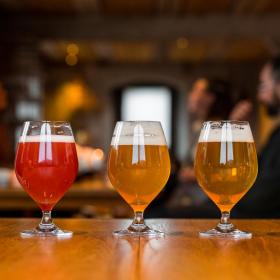 Copenhagen – The city of Christmas beers

With 350 different kinds of Christmas beer, one of the world’s best cuisines and a dash of Danish hygge there really is something special brewing in C...

Once again the historic garden will be filled with glittering Christmas lights, wooden houses decorated with pine branches, and snow-covered trees to ... 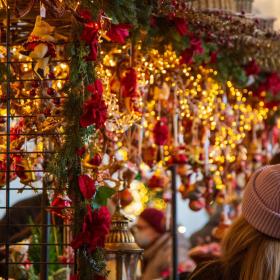 8 reasons why Christmas in Copenhagen is extra magical

The merriest of times in the merriest of places. Copenhagen simply oozes of yuletide, good times, "hygge" of course, traditional Christmas dishes, and...