Shakespeare’s fictional Danish prince is ever-present in Elsinore. From festivals and tours inside Kronborg Castle to statues and even ‘Hamlet’s grave’.

In Elsinore, just north of Copenhagen, the fictional prince Hamlet is to be found all around the city. Here, you can stay at Hotel Hamlet or at Marienlyst Strandhotel with a clear view of Kronborg Castle, and you can visit the Hamlet and Ophelia bronze sculptures outside Elsinore train station or even the grave of Hamlet. The so-called ‘grave’ is a monument shaped like a sarcophagus in granite stone, and it was erected in 1926 in connection with Elsinore’s 500 years jubilee. On one side of the monument is a lion-like figure, which resembles Hamlet, and on the other side a unicorn – the symbol of Ophelia.

More than 400 years ago, the British poet and author William Shakespeare wrote ‘The Tragedy of Hamlet, Prince of Denmark’, mostly shortened to ‘Hamlet’. The British playwright most likely got his inspiration from Nordic sagas written down by Saxo Grammaticus and printed in 1514 in Historia Danica.

Shakespeare’s tragedy is about a Danish Prince, Hamlet, who is returning to his home at Kronborg Castle after his father dies. In Elsinore, the drama unfolds after Hamlet learns that his mother has married Hamlet’s uncle, who has seized the throne and Hamlet later discovers that the uncle has killed Hamlet’s father.

The drama was published around 1599 and 1601, and it is Shakespeare’s longest play with 29,551 words according to Guinness World Records. In 1816, amateur actors performed Hamlet for the first time at Kronborg Castle. That was to commemorate the 200th anniversary of Shakespeare’s death, and a tribute performance was repeated 100 years later by the Danish Royal Theatre. By 1937 the performances became a recurring event, and today, you can experience them outside Kronborg Castle every July and August.

You can also embark on a free Elsinore walk and learn about the old port city and how it came to wealth several hundreds of years ago with the introduction of Sound Dues – a toll for the ships to pay when passing the narrow strait.

The history of Elsinore can provide an insight into life back in the day when Shakespeare wrote the famous play more than 400 years ago.

Facts about Hamlet experiences in Elsinore

Download a selection of pictures related to Elsinore. Press photos - Hamlet experiences in Elsinore. The photographer must be credited. 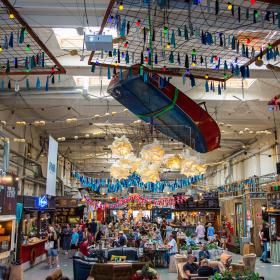