Around Copenhagen today, many royal sights remain as a historic part of the Danish Monarchy.

Historically, the island of Slotsholmen, where Christiansborg Palace lies, was the centre for the Danish monarchy and the seat of power in Denmark. Successive rulers and kings occupied this site from the 1100s, but when a fire destroyed the palace in 1794, the Royal Family moved to Amalienborg, where they live today. You'll find plenty of reminders of the former royal residents around Slotsholmen today, including the Royal Library and Christiansborg Palace itself.

Castles, Gardens and Palaces in Copenhagen

Amalienborg Palace
What could be more Danish than popping round to the Queen’s house, Amalienborg Palace, during your visit? It’s accessible and open to the public and shows how close to the Danish people the Queen and her family are. Of course, you won’t be able to visit any private rooms, but you can walk through salons and rooms used by the Royal Family for state occasions and visits.

With four 18th century palaces set around a cobbled square and a statue in the centre of Christian IX, the buildings are considered one of the great masterpieces of Rococo architecture in Europe. The statue itself, by French sculptor Jacques-Francois-Joseph Saly is a high point with a story to tell. Designed to glorify the monarchy, it is one of Europe’s finest equestrian statues and cost almost as much to make as the whole of Amalienborg when it was built.

The Changing of the Royal Guard
Every day at 12:00 noon you can see the changing of the Royal Danish Guard outside Amalienborg Palace. The Guard leaves its barracks at Rosenborg Castle at 11:30 am and marches in signature uniforms with a bearskin hat through the city, passing the Round Tower and Kongens Nytorv on their way to the palace. It’s quite a parade, including a band of 36 musicians, a drum and fife corps with 12 drummers, and 35 guards.

Amalienborg Museum
One of the four palaces in Amalienborg Square, Christian VII’s Palace, is open for visitors and contains a museum, while the other three are the private residences of the Royal Family. Visit the surprisingly intimate rooms and explore the history of Denmark’s monarchy through an array of exhibitions. And remember to check out this year's special exhibition ‘A Queen’s Jewellery Box -  50 years told in Jewellery’ too.

Rosenborg Castle, the Crown Jewels, and the King’s Gardens
Beautiful Dutch Renaissance-style Rosenborg Castle dates to the early 1600s and is set in Denmark’s oldest royal garden, The King’s Garden. Special vaults house the Crown Jewels, a collection of jewellery and crowns dating to the 1600s, while the upper floors comprise grand halls, thrones, and a historic art collection. The King’s Garden was once the exclusive grounds of royalty and contained vegetable gardens for the palace but is now a popular green oasis and picnic spot in the summer. It is particularly beloved by children who flock to the puppet theatre established by Helgo Jørgensen in 1970 and the creative dragon-themed playground.

Christiansborg Palace
This 800-year-old palace now houses the Danish Parliament (as seen on TV's Borgen), Supreme Court and Ministry of State, as well as stately halls and rooms still used for official royal occasions. Five areas are open to the public, including the Royal Reception Rooms with the Great Hall and The Queen’s Tapestries, which tell the story of Denmark. They were given to Queen Margrethe on her 50th birthday. You can also visit The Royal Stables, The Royal Kitchen, Christiansborg Palace Chapel and the Ruins under the Palace, the site of Bishop Absalon’s 12th-century castle.

Frederiksberg Palace & Gardens
This Baroque residence next to Copenhagen Zoo has guided tours on the last Saturday of every month. It is next to two beautiful public gardens, the Frederiksberg Palace Gardens and Søndermarken. The palace gardens have beautiful floral displays in spring and summer, with spectacular blooms around the entrance area, and have plenty to amuse all ages, from playgrounds and boat tours of the canals and lake through to a Chinese Pavilion and the Temple of Apis. In Søndermarken, you can walk or jog around a more forested, hilly green space, also in view of the palace.

The Hermitage Hunting Lodge
This royal hunting lodge is set in a UNESCO-listed landscape in Dyrehaven deer park. Dyrehaven itself is a beautiful green forested space under an hour north of Copenhagen and the home of over 2000 free-range deer. It is easily accessible by train from central station and makes for a great countryside day trip.

The royal hunting lodge was particularly well known for its dinner parties and for a special interior design trick: a table that could be elevated from the floor below with food on it. This meant that the King and his guests could have more private conversations in the dining room without the need for servants who might eavesdrop.

Frederiksborg Castle
A short drive from Copenhagen in Hillerød, this picturesque Renaissance building is surrounded by beautiful gardens and houses at the Museum of National History. Set on a magnificent lake, it is acclaimed as the most beautiful Danish castle, with a large Baroque garden inviting comparisons with Versailles. It is considered one of the most spectacular Renaissance buildings in Denmark and its church is similarly stunning. With the Danish National History Museum inside it, a visit takes you back in time.

Kronborg Castle
Another short trip from Copenhagen, this UNESCO-listed castle is famously the setting for Hamlet and has played host to kings and queens as far back as the 1500s. Owing to its location, the castle has played an important strategic role over the years, controlling the Øresund Strait and boats sailing down it. Located in Elsinore around an hour north of Copenhagen, a day trip to visit the castle could also include a trip to the Bjarke Ingels Group-designed M/S Maritime Museum, where an exhibition will be held through 2022 about the Queen’s ship, and a stroll down the town’s pretty and historic streets. The basement of the castle contains a secret on its own - a sculpture of Holger the Dane, a historic figure who will come to life again when Denmark is in direst need.

The Floating Castle
The Queen’s royal ship Dannebrog will turn 90 in 2022. In its honour, there will be a special exhibition at the M/S Maritime Museum in Elsinore, charting its course through nine decades of royal service and showing its different functions as a floating palace, home, school ship and symbol of royal power. The exhibition runs from 8. February 2022 until 21. August 2022.

Good to know: The Copenhagen Card includes access to Rosenborg Castle, Christiansborg Palace and Ruins, Kronborg Castle, Amalienborg Palace, Frederiksborg Castle and Tivoli Gardens, plus free transportation in the capital region to all of these castles.

The Royal Danish Playhouse
A slice of modern architecture sitting on the water at Nyhavn, the Playhouse is the centre of theatre in Denmark. The award-winning building was designed by Danish architects Lundgaard & Tranberg and opened in 2008 with a royal performance of Hamlet, attended by the Queen and her husband, Prince Henrik. It’s the national centre for dramatic art and has three stages, showing top-level theatre productions, along with a cafe, beautiful foyer and encircling boardwalk that takes you around the theatre to Langelinie.

It’s not just good-looking, it’s also good for the environment. Set on the harbourfront, it uses water from the sea in its cooling systems and has materials on the roof that provide heating.

The Royal Danish Theatre’s Old Stage
Another of the Royal Danish Theatre’s venues, this historic space is almost exclusively used for ballet performances. On the edge of Kongens Nytorv, the elegant Baroque building has hosted royalty through the centuries and has a dazzling interior with painted ceilings and glittering chandeliers. In the auditorium, boxes are edged in gold. When the Queen or her family attend, it is traditional for the audience to rise and stay standing until they are comfortably seated.

The Royal Danish Opera House
The Opera House is a stunning modern building on the waterfront, designed by Henning Larsen Architects and given by the A.P. Møller and Chastine McKinney Møller Foundation to the Danish people. It is the Royal Danish Theatre’s third venue, and hosts opera and orchestral performances in its 14 stories, five of which are below ground. Inside, the space sets the scene with a ceiling in the main auditorium adorned with 1.5kg of gold, bronze reliefs by Per Kirkeby, and light sculptures by Danish-Icelandic artist Olafur Eliasson. A new public park, ‘The Opera Park’, is set to open in 2023 offering a green space next to the cultural landmark. The building has 3,500sqm of solar cells on its roof, covering almost a third of the building’s energy consumption, part of its mission to become a climate-friendly theatre.

The Royal Danish Library - The Black Diamond
The library and exhibition space are a significant cultural landmark on Copenhagen’s harbourside and is made up of an arresting modern building of black marble and glass - The Black Diamond - attached to the Royal Library, which dates to 1906. At the back of the building, through a brickwork archway, you’ll also find the gardens of the Royal Library, a secret oasis away from the crowds.

Frederik's Church (The Marble Church)
Next to Amalienborg, this iconic church has strong links to the Royal Family. It is open for visitors with tours of the dome during the weekend. Known as ‘The Marble Church’, it is not made of marble but limestone, due to budgetary constraints when it was being constructed. Another church in Copenhagen with a royal connection is Holmen’s Church, where Queen Margrethe II got married. 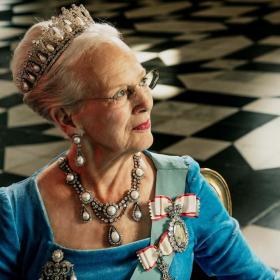 In 2022, Denmark’s monarch, Queen Margrethe II, will mark her Golden Jubilee and celebrate her 50-year reign as head of state of Denmark, the Faroe Is... 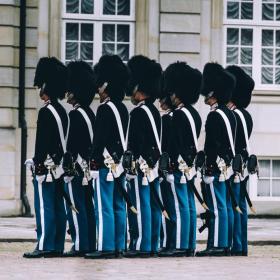 The Monarchy in Denmark

Denmark has been a kingdom since Viking times and has one of the oldest monarchies in the world. The current unified kingdom was founded by the Viking... 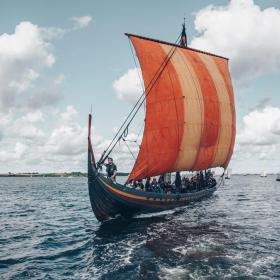 Home to Vikings and one of the world’s oldest monarchies Copenhagen has seen grandeur and decay. Its streets have inspired the likes of HC Andersen an... 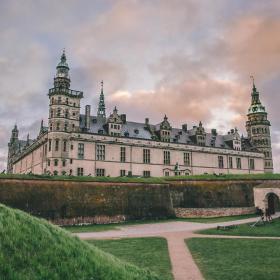 Copenhagen is a royal city and home to one of the world's oldest monarchies. In and around the city you will find castles, palaces, royal statues and ...