Borgen is back - where to stay, eat and drink Borgen style in Copenhagen

Borgen is back. The BAFTA-winning Copenhagen-based political drama about Birgitte Nyborg, who becomes Denmark’s prime minister, is returning to a global audience.

It all began 10 years ago when season 1 premiered on BBC Four on 7 January 2012. The Danish series quickly morphed into one of Scandinavia's biggest television exports, and now it returns with Sidse Babett Knudsen playing the role of Denmark’s Minister of Foreign Affairs working out of Copenhagen.

Discover the Danish capital through the lens of Birgitte Nyborg, and stay, eat, and drink Borgen style in Copenhagen. The Danish political drama premiered on Netflix to a global audience on 2 June 2022. 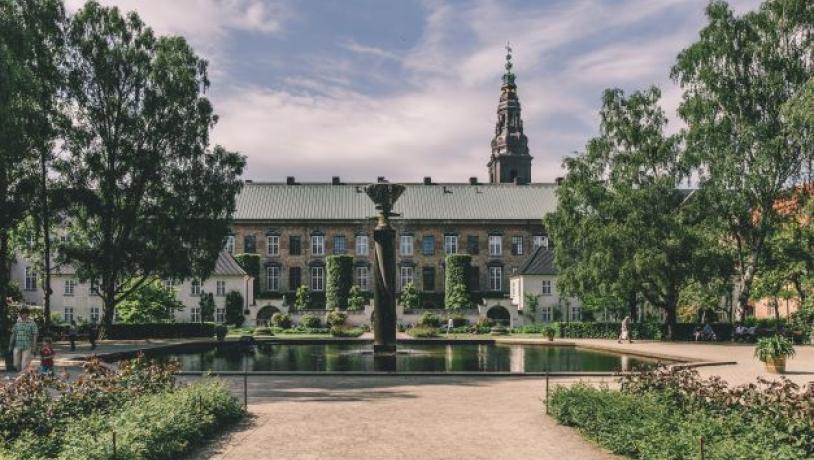 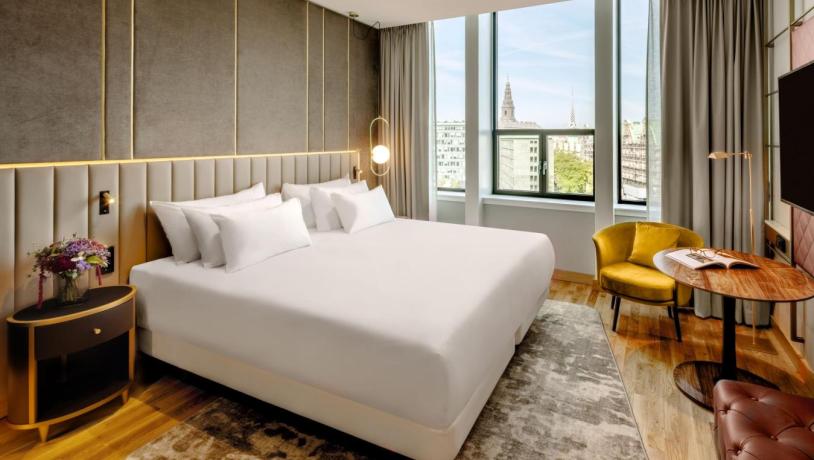 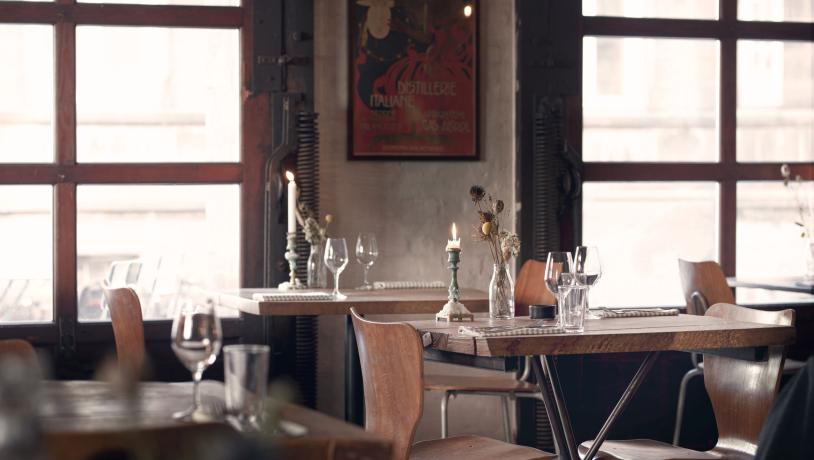 In season 3, Birgitte Nyborg decides to create her own party, The New Democrats. She starts looking for office space, and a real estate agent takes her to a run-down factory – a former blacksmith workshop. Birgitte falls in love with this building full of grit, soul and history, and her new political adventure starts here. The inside of the building is a movie set, but when filmed on the outside, it’s Restaurant Il Buco. Back when Borgen’s 3rd season was shot, the people behind Il Buco had just started their new journey, like Birgitte, but today Il Buco is one of the hip restaurants in town, where innovative Italian food is served together with trendy natural wines and local organic produce - Website / Press photos.

Adam Price is not only the talented screenplay and theatre writer behind Borgen. In Denmark, he is very well known for his food tv-show 'Spise med Price' (Dining with Price), and for his Danish restaurants, which he runs together with his brother James Price.

Try Borgen’s screenplay writer’s cooking at Brøderne Price’s restaurant close to Rosenborg Castle named Brdr. Price Rosenborggade, or at Brdr. Price's restaurant in the Tivoli Gardens, one of the oldest amusement parks in the world. The two food-loving brothers serve classical Danish food with smørrebrød - open-faced sandwiches - for lunch, while the evening menu offers high-quality bistro dishes, whereas their Tivoli restaurant is all about burgers and comfort food in Tivoli’s vintage, beautiful surroundings.

Fun fact: When Tivoli first opened back in the 1840s, the Price family worked there as artists at the Pantomime Theater, which today is the only one still active in the world. Now the family is back at Tivoli Gardens, but this time behind the kitchen counter - Website / Press Photos. 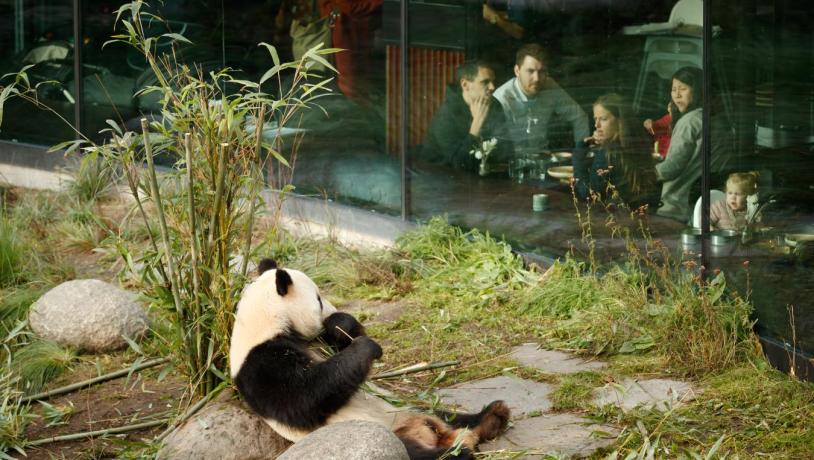 In Borgen’s new season, the first episode starts with a meeting between Denmark and China taking place with two very cute diplomatic guests: two pandas. At Bistro Panpan, you can eat right next to the giant panda Xing Er, and sometimes you might also meet his partner, Mao Sun, at the Panda House designed by the Danish world-famous architect Bjarke Ingels - Website / Press Photos. 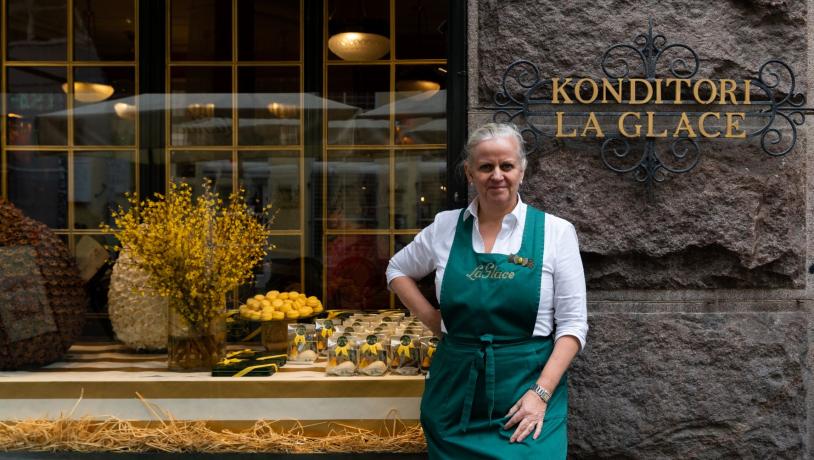 In the 4th season, Birgitte Nyborg is close to losing her ministry and asks whether her team has prepared a farewell reception with strawberry cake - which politicians often get when they get fired - from Conditori La Glace. A classical favourite amongst locals, travellers, celebrities, and many politicians from the “real” Borgen, La Glace is the oldest and one of the best confectioneries in Copenhagen, with more than 150 years of experience and history.

La Glace’s strawberry cake is served during the summertime, between mid-May and September, as La Glace only uses Danish strawberries when they are in season. The people behind La Glace recommend it together with their La Glace Teen, a black tea infused with rose petals, orange peel, vanilla and a slight hint of cinnamon - Website / Press photos.

In the 4th season, Birgitte lives alone and dedicates 100% of her time to her job. Close to a breakdown, she invites her constituted arctic ambassador out for wine and seafood at one of Copenhagen’s most popular hangouts by the water: Kayak Bar. Kayak Bar is located right in front of Birgitte Nyborg’s ministry, in front of Arne Jacobsen’s National Bank and below Knippelsbro bridge, which is often shown during Borgen’s 4th season. Kayak Bar offers seafood, drinks, live concerts, and a floating beach, as well as guided kayak tours around Copenhagen’s clean, picturesque harbour, with its narrow canals and coloured houses combined with cutting-edge Danish architecture. For travellers who would like to help keep the canals clean, Kayak Bar is one of the starting points for The Green Kayak, a free tandem kayak that can be lent for two hours with ocean clean-up gear onboard. Remember to book online well in advance, as it is an extremely popular experience - Website / Press photos. 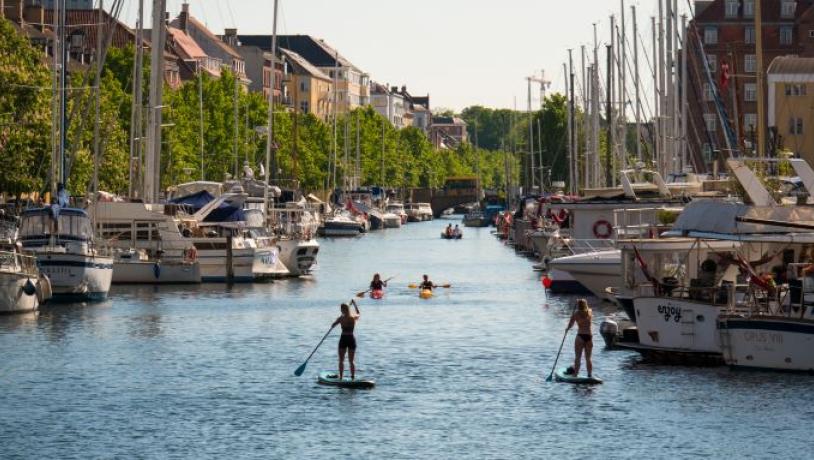 The coloured houses and idyllic canals make Christianshavn unique and one of Copenhagen’s most picturesque districts. This is where TV1’s journalist Katrine Fønsmark lives in the series Borgen. You will find Katrine’s door, where Kasper usually waits for her, at the address Overgaden Oven Vandet 48. Nearby, at Café Wilder, is where she stumbles upon Kasper and his new girlfriend, Lotte. You can stop here for coffee or for a glass of wine and enjoy some seafood in Copenhagen’s most maritime district - Website / Press photos. 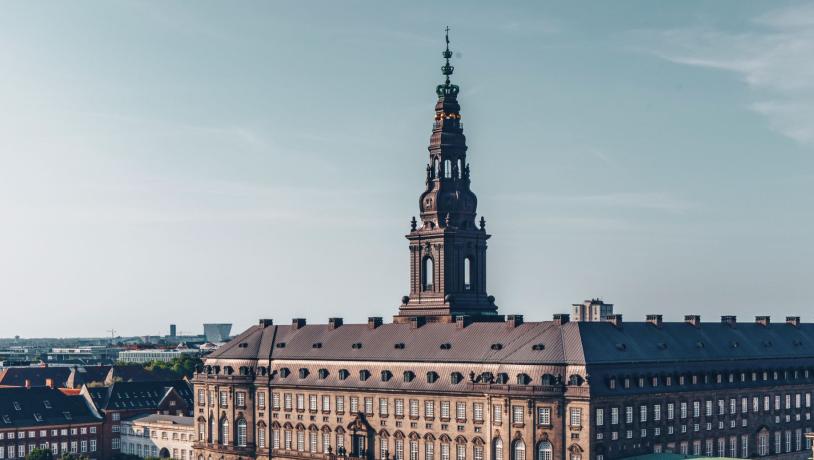 Christiansborg, the former Royal Palace, is now home to the Danish Parliament where Borgen takes place and can be explored by travellers in many ways -
Website / Press photos: 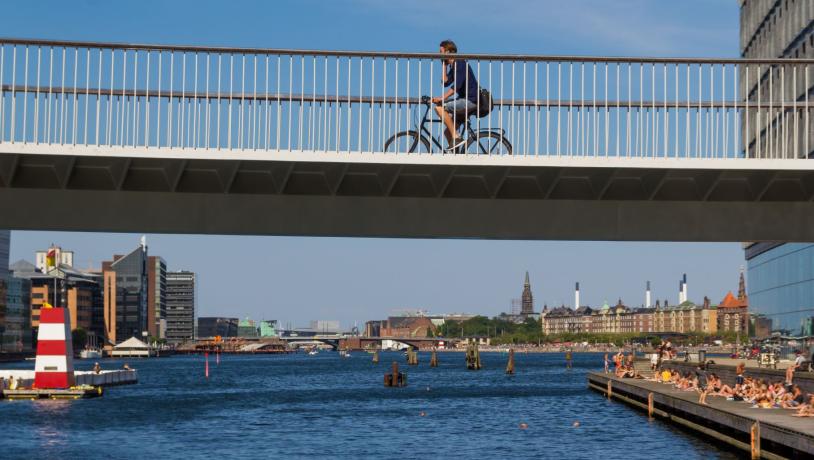 Put on some comfortable shoes, rent a bike or even a boat and let your trip of the day be the Harbour Circle. The route snakes its way through the neighbourhoods Islands Brygge, Amager, Sydhavnen, Vesterbro, the Inner City, Holmen, and Christianshavn, and you will stumble upon some of the most beautiful Borgen locations:

If you are a fan of Birgitte Nyborg you don’t want to miss Nordic Noir Tours’ Borgen tour. Here, you will explore the Danish Parliament, Christiansborg, and its beautiful surroundings, which were used in the series. Walk underneath the arches where the politicians can be seen plotting and hear how the show both inspired and got inspired by Danish business and politics. At the main entrance, you can spot the place where Birgitte Nyborg parks her bike. On the other side of the water, behind the Black Diamond, you might also recognise the glass building where the TV1 editorial team works from. The tour will finish in the canals district Christianshavn, where Kasper Juul, Birgitte’s spin doctor in past seasons once more attempted to conquer the heart of the beautiful journalist Katrine Fønsmark - Website.

Borgen in real life: where politicians hang-out in Copenhagen 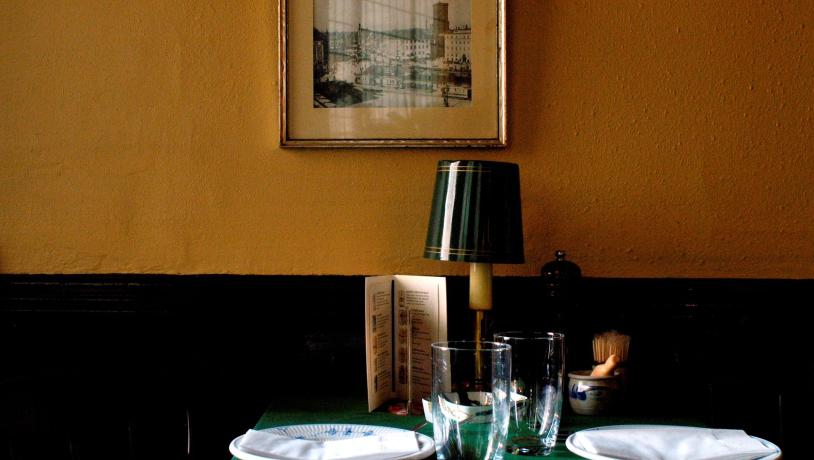 If you are looking for a classic, Danish smørrebrød with herring, snaps, egg, and shrimps, Slotskælderen is the place to go. Slotskælderen is a popular place to eat lunch. Here they serve cold as well as hot dishes - and of course, snaps en masse. The restaurant is originally from 1910 and still has an authentic atmosphere. Slotskælderen is only a stone's throw away from Christiansborg and is often frequented by Danish politicians - Website / Press photos.

Cocktails and cigars at Brønnum

Rumour has it that Brønnum’s cocktail bar is a favourite after-work meeting spot for politicians from Christiansborg. Brønnum's old rooms have been used as a café, bar, and restaurant for more than 125 years. People from all social classes have frequented the bar, including many famous Danish musicians, artists, and writers such as H. C. Andersen. The speakeasy-style cocktail bar consists of six rooms, and the entrance and main bar are set with brighter lights and upbeat music. As you move through the rooms, they become darker and more intimate. If you're looking for a more private space to host your secret lodge meeting, Brønnum's private dining room will do the trick. You can top it off with one of their Cuban cigars, now you're at it - Website.

A bar where Danish politicians notoriously hang out and sometimes are guest bartenders. Their unofficial motto is “What is said at Toga, stays at Toga” - Website.

Experience 800 years of royal history at the awe-inspiring Christiansborg Palace.

What to see and do in Christianshavn

The coloured houses and idyllic canals make Christianshavn unique and one of Copenhagen’s most picturesque districts.

The harbour in Copenhagen

Copenhagen’s harbour has always played a central role in the city, reflecting its spirit. Once a fishermen’s and merchants’ port, it since evolved int... 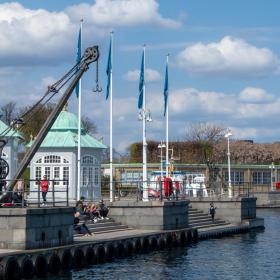 Movie Locations: Enjoy ‘Another Round’ in Copenhagen

The Oscar winner of the Best International Feature Film at the Academy Awards 2021, Another Round (Druk), was shot in Copenhagen and surroundings. Dis...